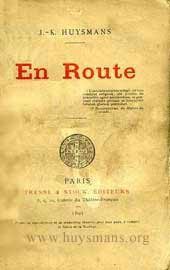 Could there be anything more subtly quaint than an exhausted debauchee seeking his Redeemer through some approach not too hopelessly vulgarized? He had a horror of the commonplace, had Durtal, the hero of this novel, and "how could he live among stupid people like the devout, how listen without gnashing his teeth to the affected chants of the choirs?" He had that fastidious hatred of humanity, that total abortion of humour, that savage isolation of spirit, which are among the commonest consequences of merely filthy sensuality. And with infinite, if ironical, solemnity M. Huysmans tells how this precious creature, after the lapses into sexual nastiness spiced with blasphemy detailed in "Là Bas," found at last a way of — one can hardly call it repentance — a reunion with his Maker possible to a man of his remarkable refinement and distinction through the intervention of a Trappist monastery. There one may be converted and communucate, and still entertain a fine "contempt for relations" and "disgust for acquaintances," as Mr. Paul renders it. This may seem grotesque to the ordinary sane reader; but that is a fair summary of this book, which is translated, at any rate, in good faith. This history Mr. Kegan Paul places before the English public in cosmopolitan English. "May it speak to the heart of many men in England?" he prays — this new method for the superior unclean. One must needs accept the earnestness of his intentions, albeit a wide publicity involves a certain danger of vulgarization to the new road. We doubt if Mr. Paul has duly considered the possibility.

Durtal as a character is indisputable. He is the pathetic victim of civilized security. Infinite generations of ancestors lead up to him from the primordial beginnings of life, down at last through hundreds of generations of brave human fathers and kindly mothers. It is a strange and inspiring thing — almost, indeed, a terrible thing — to consider the long succession of ancestral struggle, emotion, affection, pain endured, that is embodied in a living man. So he comes into the world in his turn with the gifts and implications of the struggle, an intelligence, an imagination, intellectual senses finely percipient, a desire to assert himself and impress himself upon the world, sexuality ruling his emotions to the end, that in his time he too may hand on the expanding light of life. And by accident he is of independent means, irresponsible, in a great city. Circumstances conspire to dwarf his moral development and destroy his self-respect. All gratifications come to him without effort; the mercenary expedients of civilization trick nature, and by middle-age he is at an end, his soul inhuman, anti-human, no share left to him in futurity, no children, no business, no political interests — a walking dead man, a dead and already decaying twig still projecting among the waving infinities of the tree of life. He eats — it is the chief business indeed, and he expresses his religious ideas in terms of the restaurant — his perverted animalism occasionally asserts itself, with dwindling force, towards a certain Florence and her "vagaries," and he can still appreciate music. Blackest of all things upon his conscience lies the unintentional defilement of a Host. Before such a man, what entertainment is there left to compare with a religious struggle? And so deeply is his sanity undermined by the life he has led that this religious struggle is in no sense a broadening or ennobling of the man. His sexual interests, which are no longer of the slightest importance, one might imagine, in this world or the next, or at least of interest only to the sanitary inspector in the same way that a decaying herring is of interest, still absord him. He will still be a barren tree, a useless cumberer of the earth, will still hate and despise the "herd," but he will — to the glory of Heaven — live chaste! And the book Mr. Kegan Paul has given us tells how he set about doing it, how he made a confidante of "Our Lady" and told her all his little troubles, how

And then he went to the Trappist establishment, and devils came to him in horrible but interesting dreams; and the powers of Heaven and Hell fought together in him for this inestimable chastity of his, and he made his first confession since childhood, including the horror of the defiled Host; and was converted, and returned to Paris in a state of immense satisfaction as selfish, egotistical, useless, parasitic, and diseased as when he set out: —

"He groaned, knowing that he should never more succeed in interesting himself in all that makes the joy of men. The uselessness of caring about any other thing than mysticism and the liturgy, of thinking about aught else save God, implanted itself in him so firmly, that he asked himself what would become of him at Paris with such ideas."

This is pretty — that last infirmity of aesthetic minds.

"He had discovered how to lose the amusement of bric-à-brac, how to extirpate that last satisfaction in the white nakedness of a cell."

And this penance is oddly significant of the true quality of this new Catholicism — a passage upon which only Swift could have commented with proper effect.

"Ah, those paths at the monastery, wandered in at daybreak; those paths where one day, after a communion, God had dilated his soul in such a fashion that it seemed no longer his own, so much had Christ plunged him in the sea of His divine infinity, swallowed him in the heavenly firmament of His person."

Apart from its interest as a study of the mental disease resulting from want of employment and sensual excess, in which religion is a synonym for a morbid abstinence, and even the Deity becomes at last merely an infinite, all-powerful sex-maniac, "En Route" is a remarkably dull book, with such rare unintentional gleams of humour as "ugliness is sacrilege," "nothing is equal to the frightful sin of a confusion of Romanesque and Greek." For whole pages Mr. Huysmans forgets his story and bores with digressions on plain-song. And the quality of Mr. Kegan Paul’s English certainly enhances the volume’s unreadableness.