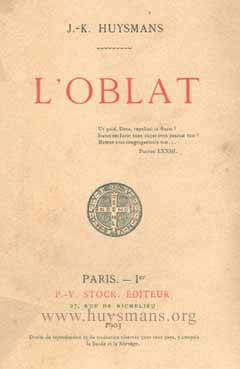 The translator of Huysmans has assuredly no easy task. He is not indeed faced, like the translator of Voltaire or Anatole France, with the impossibility of carrying over into another tongue the intransmissible graces of the French language when spoken by a master; for Huysmans is always a Dutchman writing in French. But he is faced with the problem (almost as acute, we imagine, for French readers) of grappling with that extraordinary vocabulary, to which florists’ catalogues, jewellers’ advertisements, cookery receipts, ecclesiological encyclopedias, directories of Church ceremonial, handbooks of painting and architecture, and illuminated manuscripts seem alike to have contributed their most recondite contents, to be stewed in a pungent juice of Parisian slang. No one could blame a translator who incurred (or, better still, frankly confessed) defeat at the worst entanglements.

It is unfortunately impossible to extend that indulgence to the present (apparently American) version of "L’Oblat," which makes a very poor pendant to Mr. Kegan Paul’s workmanlike translation of "En Route," the first volume of the famous trilogy issued in 1896. ("La Cathédrale," the intermediate work, appeared in English in 1898.) The present translation fails not only at obscure points but at places where no translator ought to stumble. To give a few examples. On page 22 we read: "...then the Magnificat itself, with solemn tone, and the Salve Requiem to remind the creature of the reality of sin, that life is not all the long hurrah, and that he must plead for forgiveness." Turning to the French we find: "...et le Magnificat, entonné sur le ton solennel, et le Salve Regina rappelant la créature à la réalité du péché, implorant , aprè les hourras liturgiques, sa grâce." On page 23: "c’est encore une raison de précellence" becomes "This may be some sort of a reason." On page 25: "la Catherine est bien empressée; pour ça vous pouvez consulter; il n’y a qu’une voix" is rendered "Madame Catherine is most obliging. But you’d better see her yourself and tell her what you want." On page 36, "le goût anti-liturgique" is rendered "auto-liturgical taste"; and on page 53, "la Patrologie de Migne" is "Migu’s Pathology." The last two may be only misprints; but on page 282, "J’irai vous demander à dîner" is turned into "I shall get you to come and dine with me." Even when positive errors are avoided, the looseness of the translation, omitting and modifying phrases without any real need, destroys what can be left in English of the individuality of Huysmans’s style and mind. If the volume, like its predecessor, passes through more than one edition, a thorough revision will be essential.