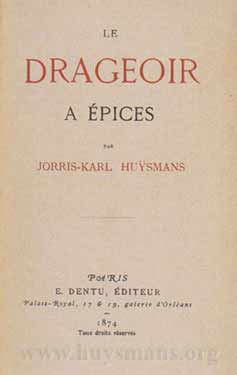 THE CHARACTER OF HUYSMANS

These volumes are respectively the first of all of Huysmans’s books and the first of his religious novels. But in all his books there is only one subject: Huysmans. And since his life as a Civil Servant was deficient in variety and interest, his great struggle as an artist is to discover something new to say. Huysmans was the perfect Naturalist; he had no imagination, but he had a prodigious gift of observation and description. Zola allowed his popular imagination to stampede him into fertile melodrama; the Goncourts possessed such quantities of "documents" of all kinds that they never lacked a subject. But Huysmans had too much irritated good taste to lapse into melodrama, and he had not the flair of Edmond de Goncourt nor his opportunities. Whenever Huysmans had finished a book he spent months, sometimes years, of agony in looking for a new subject for his unique style, some thread on which to string his impressions. Huysmans was extremely interested in the workings of his own mind, and it is strangely paradoxical that the most egotistic and introspective of men should have begun writing as the disciple of the masters of objective fiction. Thus, Huysmans was "the perfect Naturalist" simply because of his inability to invent, which severely limited him to themes for which he could secure documents and to a method of descriptive impressionism. Somewhere in his correspondence Flaubert speaks of Huysmans as a "pauvre bougre"; the sage of Croisset detected at once Huysmans’s lack of imagination, and nothing could induce him to admire the laboured realism of "Les Soeurs Vatard." It was only by a series of tours de force that Huysmans kept up the illusion that he was an objective writer, Under various pretexts he always writes of himself, and of course the luckiest and most fertile of his disguises was religion. Here, under pretext of edification, he could analyse himself and his emotions to an unlimited extent, and here also he found an immense repository of "documents" hitherto untouched by any writer of his school, unless "Madame Gervaisais" be held an exception.

From this it may easily be deduced that the writings of Huysmans are better explained by a description of his personality than, as is much more generally the case, by an impersonal analysis of his work. There is a good deal of information about Huysmans in existence, but much of it is open to suspicion: those who have left notes or impressions of Huysmans may often have been biased by prejudices of a literary or anti-religious or religious nature. One of the least liable to this objection is the essay of R. de Gourmont, "Souvenirs sur Huysmans," for although Gourmont was not a Christian, and, moreover, was very hurt by Huysmans’s breaking off the friendship at his conversion, the malice in his anecdotes is not excessive. Gourmont introduced himself to Huysmans (by asking his acceptance of a dedication) in 1889, fifteen years after the publication of the "Drageoir aux Épices." Gourmont was then employed at the Bibliothèque Nationale and Huysmans at the Ministère de l’Intérieur. Almost every evening for two or three years Gourmont called for Huysmans, and proceeded with him to the Café Caron. Most of his books were written on Government paper in Government time; he made very few corrections, and wrote as he spoke (which is amazing, considering the originality, complexity, and vigour of his style). This, as Gourmont remarks is a proof that his curiously metaphorical speech was the "natural reflection of an uneasy character, curious of what is rare, unheard of, and impossible." The "documentation" of his books, which appears at first so marvellous, was really very rudimentary. For example, the extraordinary chapter on the Latin writers of the decadence is simply an able condensation of the huge book written by "the heavy and learned professor" Ebert. It is amusing to reflect that Lemaître’s petulant and contemptuous remarks on Huysmans’s taste in Latin poetry were actually directed against a formidable German authority whose erudition was as crushingly superior to that of Lemaître as his was to Huysmans’s.

The Café Caron has been admirably sketched by Huysmans in his "Habitués de Café." Here, or at the Café de Flore, or at a restaurant in the Place Saint-Sulpice, Huysmans turned on his conversational fireworks.

Huysmans’s speech was extremely "cru," and in conversation he habitually used the most daring and indecent comparisons. His literary judgements were excessively malicious, and he particularly detested Bourget and Maupassant, whom he described as "a couple launched in the world on the conquest of women." "Bourget" (he would exclaim), "Bourget les allume avec sa psychologie faisandée et recuite; Maupassant survient, qui n’a plus qu’à se mettre à table!" As for Camille Lemonnier (the Belgian Zola), Huysmans could go on for hours about him, calling him a "furniture remover." "Le voyez-vous entré chez Zola avec ses paniers pleins de paille et vidant la maison pour en meubler sa bicoque belge!" He said horrible things about a woman novelist, calling her "La fille de brasserie," "La belle Juive," although she was extremely respectable; another woman writer was "la cardeuse de matelas," and another "la poseuse de sangsues." And yet at heart Huysmans was a good-natured fellow, and while he was abusing these people, "sharpening his claws on their reputations," he was secretly performing many amiable and delicate offices of friendship for them. Huysmans’s temperament was that of a born satirist; it was almost impossible for him to see persons and things except in their worst and most ridiculous light. Moreover, the fates had made him witty, and notoriously the witty man is careless who is made his prey. What could be more characteristic of Huysmans than his paradoxical diatribes against French cooking and his fury (this partly borrowed from the Goncourts) against the adulteration of food? The culinary metaphors and preoccupations whic remained with Huysmans even in his most religious moods (there is a wonderful description of a monastic meal in "En Route") were sometimes very ludicrous. But food was an elementary passion in Huysmans; that is why many people prefer him as Folantin in search of a decent dinner than as Des Esseintes struggling against the most intellectual and superior of boredoms, or as Durtal exhausting all the psychological mysteries of faith. When Gourmont met Huysmans the latter was fast becoming the Folantin of the Church.

This singular idea is developed in "A Rebours," which for some readers remains the central and most important section of Huysmans’s work. It is easy enough to ridicule the character of Des Esseintes and to gibe at his paltry paradoxes, if we take the view that Des Esseintes is a hero held up for our admiration. Huysmans, as we have noted, always writes about himself and generally with a certain bias in his own favour; but in "A Rebours" he has written a criticism of the impressionist fallacy and of the futile "life of pleasure." The great enemy of minds like Huysmans’s is boredom — and that not from the common cause, shallowness, but because to such natures perpetual excitement is necessary, and this excitement can only be procured by outside stimulus. In a sense all artists need stimulus, but the health of the artist and the quality and duration of his creative faculty depend often upon the nature of the stimulant. There must be a constant gain, a building up within, or the need for stimulus rapidly becomes a hysterical craving for what is merely novel and bizarre. That was the malady of Huysmans, ad to some extent that was the malady of society both then and now. But while the average person seeks to get rid of his boredom through the banal methods devised by impresarios of all kinds, select and sensitive natures, like that of Huysmans, sought distraction in constantly renewed novelties of aesthetic stimulus. "Huysmans se convertit par snobisme" — to be different from the crowd.

Even when subject to the discipline of the Church, even when he had adopted the language and style of thought of "les bedeaux et la clique des pécores pieuses," Huysmans did not quite abandon his independence nor the obscenity of his speech, nor the malicious duplicity of his satirical soul. Hardly a day passed from 1893 to 1906 (MM. Deffoux and Zavie assert in their brilliant "Le Groupe de Médan") without Huysmans writing a letter to some old lay friend abusing a bishop or some other pious individual, although at the same time he was writing "édifiants billets" to these unconscious victims of a supreme talent for abuse. What a volume could be made of the letters of Huysmans, and how long it will be before we really get the truth about Huysmans! It is not generally known perhaps that in 1912 M. André du Fresnois was compelled to withdraw from circulation his pamphlet "Une Etape de la conversion de J. K. Huysmans," or that in 1908 the Revue Hebdomadaire was forced to discontinue publishing a series of articles written by MM. Céard and Caldain on the subject of "Huysmans intime."

All of Huysmans’s earlier work is addressed to people of intelligence and sensibility; in the "bits" of the "Drageoir aux Épices" and "Croquis Parisiens" may be found some admirable writing and the germ of nearly all his subsequent work. Every one who has understood Huysmans’s method has come to cherish particularly this early work. "En Route," written in the fullness of his powers and under a tremendous stimulus, is undoubtedly a more important work and certainly the best of the books with a religious motif. But some of these very early pages, filled with odd reminiscences of Dutch painting and the prose of the de Goncourts have an energy, a freshness, a stir, which are extremely animating. How characteristic of Huysmans is "Les Kermesses de Rubens," and how early he developed his style! Who but Huysmans would talk of a "gros nez saillant étrangement, diapré de bubelettes nacarat, boutonné d’améthystes troubles," and of "ces bauges de Paris où s’agitent comme cinglés par le fouet de l’hystérie un ramassis de naïades d’égout et de sinistres ribolteurs"!