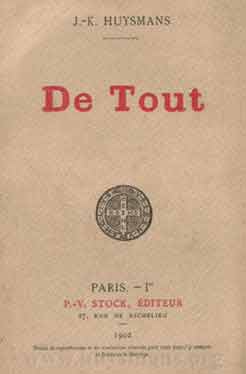 The Academy and Literature

Huysmans is one of the most distinguished and adept of living artificers in words. He is capable of succeeding in feats which might have baffled even Stevenson. To watch him describe anything, no matter what, is a pleasure; to the expert it is a treat. His power of observation is cultivated to an extraordinary degree, and it is accompanied with absolute fidelity by the expressive power. In other words, what he sees he can make his readers see. Yet it appears to us that the most interesting thing about Huysmans is Huysmans, and not his work. It is not too much to say that the phenomena of his religious experiences have amazed, while they have fascinated, intellectual Europe. There was something highly piquant in the fact that the man who wrote A Vau l’Eau in his youth should in his maturity write La Cathédrale and that nightmare of literary asceticism, Sainte Lydwine de Schiedam. But there was something more than piquant, there was something unconvincing and incredible, in the statement that a man with a type of mind — brilliant, cynical, curious, truth-seeking and careless of the results of that search — such as Huysmans originally had and as all his work proves it still to be — that such a man had accepted the rule and sovereignty of the Roman Catholic Church. Huysmans’ is a first-class intelligence, an intelligence incapable of fear, of opportunism, of delusion. No one who has read A Vau l’Eau, that pitiless and bitter sketch, is likely to deny that the writer of it was necessarily a man of singular moral courage. And one has the right to ask, without giving offence: What first drove that man to the sackcloth mood of repentance? It is not, of course, about the route that we demand information, but about the original impulse. Was it fear, remorse? It could not have been. But might it not have been curiosity, that restless and unappeasable curiosity which marks all his career? It is difficult to imply what we wish to imply with a due regard for the punctilio of criticism. Nevertheless we shall permit ourselves to say that, abating no particle of our admiration for Huysmans, we doubt the entire reality of his religious experiences. We do not doubt his conviction of his own sincerity, but we venture to suspect that he may have deceived himself and the world too. These things have happened before. People have ignored a church, "embraced" it, and lived to ignore it again. We have said that Huysmans’ intelligence is incapable of delusion. But we would add, trying not to split hairs or to reach the meaningless, that it is perhaps not incapable of amusing itself. While incapable of delusion in the ordinary sense it might be capable of erecting one vast and splendid delusion, of arranging a factitious spectacle of emotions for its own diversion — as the Shah goes to the Empire. The capacity of the human mind to deceive itself is illimitable; and the greater the mind, the greater, in a fine way, that capacity. No man can understand himself; much less can another understand him. But, also, no man is ever absolutely honest with himself; he is only less or more dishonest. It is for this reason that the onlooker at a spiritual drama may lawfully suggest, if he may not assert, that things are not what they seem despite all these pomps and ceremonies and elaborations of detail.

A book like De Tout, issued after Sainte Lydwine, and after the Pages Catholiques with its preface by the Abbé Mugnier, decidedly increases the difficulties of comprehending the strange case of M. Huysmans. Here we have a collection of twenty-four miscellaneous essays, on such extremely diverse subjects as saints, monks, frequenters of cafés, barbers, Bruges, sleeping-cars, railway station refreshment rooms, and the "Vierge noire" of Paris. They first appeared, these essays, in such places is the Echo de Paris, where one remembers to have read the fleshly masterpieces of de Maupassant, the frank lubricity of the late Armand Silvestre, and the weird memoirs of Edmond de Goncourt. They are the expression of a mind apparently irreilgious to its foundation, railleur, enquiring, destructive.

In the paper entitled La Vierge Noire de Paris we have a series of charming pictures of a convent in the rue de Sèvres, Here is one. We have hastily endeavoured to translate the untranslatable: —

Such, in the morning, towards ten o’clock, is the establishment of the Women of St. Thomas de Villeneuve; to the works of vanity of the great industries in the neighbourhood, it opposes the works of Mercy. A crowd made up of sick people and of ragamuffins disappears within its doors. The sisters dress wounds, cure whitlows without operation, and ease old sores with white linen. Then all these unfortunates pass through a wicket where the money-taker is a nun paler than the sacred wafers that she cuts, paler than the tapers which surround her, and this nun, instead of receiving money, gives it, and distributes bread to every comer.

You will say there is no evidence of irreligion here, and there is not. But listen to this a few pages later: —

Our Lady reveals herself here as a Virgin unconstrained, benign towards all comers. She has not the slightly disdainful pout of Our Lady of Victories, that queen, and the customary service of her temples, the subalterns disguised as beadles and functionaries in chains of office, are lacking in her little church in the rue de Sèvres. She is a sister of the Black Virgins of Moulins, of Dijon, of Bourg, of Liesse, of Rocamadour, and of Chartres, and it would seem that the Virgins of this colour, who are the ancestors of our white Madonnas, are grandmothers rather than mothers to us; we count on their faculty for spoiling us, and on the weakness of their good nature; we feel that they are more indulgent, readier to pardon, and we would sooner recount our iniquities to them than to the Mother who would grumble a little, and to the Father who might be angry.

Then, before our Lady of Deliverance, we somehow fancy that we must try to become children again and to pray more with the beads than with the lips. She is so rustic, so often besought by candid women, that she has grown used to naïve prayers and simple supplications.

Can it seriously be denied that this is the apeing of the naiveté of the nuns of the early Church by a prodigiously clever man who, as an artist, has been captured by the wayward and infantile grace of those antique attitudes of the devotional mind. The Roman Catholic Church may not perceive, or may pretend not to perceive, the essential blasphemy (blasphemy from the prelatical point of view) of this passage, considered as the production of a man of subtle intelligence; but it is there plainly enough. No one but a born artist, acutely sympathetic to foreign emotions, could have written it. And we cannot think that any genuine believer in the sanctions of that Church would have dared so enchantingly and with such delicate wit to smile at the transcendental aspect of prayer. We shall not pursue the question further, but we may say that De Tout is studded with passages similar in spirit to the one we have quoted.

As a literary performance the book is simply beautiful from beginning to end. No one has written better about Bruges than M. Huysmans does here. And certainly no one has shown a more penetrating insight into the true inwardness of cafés than he shows in the essay Les Habitues de Café. You would think that the painter of Chartres Cathedral could never have left the inner boulevards. His description of the aloof, old-fashioned, sedate, and semi-clerical house of refreshment in the rue des Saints-Pères is as good as anything in the volume: — >

At the first glance this café does not seem different from the good old clubs of the provinces, but its clientèle, which is oldish and quaint, and which includes neither the gossip nor the shabby idler of the country, has affected its physiognomy and marked with a particular stamp the senility of its rooms.

Abolished manners survive there; hoary-headed waiters, who have grown grey in harness, serve in silence, express gratitude for their tips, assist you with your overcoat, precede you when you leave, open and close the door, and thank you for having come. Do not these customs seem strange in a period when the waiters of cafés either do not answer your call or hurl Boum at you, juggle with decanters and cups, cut capers with plates and glasses, and fly when you demand a newspaper?

But we have already remarked that M. Huysmans is untranslatable. He is, however, richly worth translating.