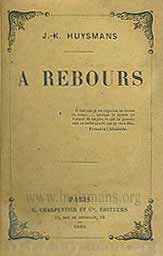 "A REBOURS," slightly sterilized, has come into English. It is too bad that we can not have our translations unalloyed: if we are going to transplant Huysmans at all, why not do it thoroughly? Chapter VI (which Huysmans, in a preface written twenty years after the publication of "A Rebours," called "the terrible Chapter VI") and the last episode of Chapter IX, are missing. They were both of them harmless enough. In the "terrible: Chapter VI, des Esseintes, one evening, picks up a young boy on the Rue de Rivoli, and takes him to a house of prostitution. While Auguste is in retirement, his benefactor explains to the marvelling women that he desires to make an assassin of the youth, "one more enemy of this hideous society." Having encouraged, during several months, a taste for luxury in his protégé, he will suppress the allowance that enables him to gratify this taste, and thereupon the unfortunate Auguste will begin thieving. The incident is a fairly successful device of the épateur, and might just as well have been retained in the English version.

There are a few other concessions to our national modesty, and one admires how the turning of a phrase or a discreet omission will emasculate. Gitons de seize ans, dodus et frisés does not mean "plump, curled, depraved little girls of sixteen." Again: "the idolatrous town which wallowed on the ground while it uttered impure psalms before the impious tabernacle of banks" does not seem to me quite so typical of the author as the literal translation: "the idolatrous town ejaculating, flat on its belly, impure canticles, etc." I may be unduly harping on details, but after all the book is a collection of details, and there is no surer way to weaken it than this eternal process of alteration, elimination, and evasion.

"A Rebours" is a curious, ridiculous and puerile book which a few spirits will always cherish with an indulgent and amused affection. It lies embedded in the end of the nineteenth century like a jewelled and perfumed corpse, stiff, cold, putrescent, overladen with rigid and heavy colours. Dragged from its tomb, and set walking on the earth in the shroud of a new language, it looks pitifully antiquated in the fresher, freer, Stendhalian air of the twentieth century, and one need but glance upon it to see how far we really have moved from the ’eighties and ’nineties. Its introversion and melancholy seem the stuffy tag-end of Byronism, or the malady of Rousseau, filtered through Baudelaire; it is unpleasantly eaten with the sense of sin; and, after all, is there not something rather bourgeois about this hatred of the bourgeois? "A Rebours," a hot-house and inverted "Walden," an adventure in escape, is adolescent literature, and should be read for the first time at that age.

But there is a lure in the creeping undulation of Huysmans’s prose. Burdened as they are with mere information, the chapters contain passages that one will reread now and then. One of them is a prose poem describing the nature of the prose poem; another a paragraph on Mallarmé and then there are a few unequalled lines concerning the poetry of Verlaine. It is easy to understand how a generation found mirrored in des Esseintes its aspirations, tastes and hatred. In those days, charming days without doubt, one could take more or less seriously such words as satanism and decadence. It was the evening of the century,

and the clear wind of Whitman had not yet blown across the European world, the war had not made men practical and modern, and Freud had not enlightened them. "A Rebours," composed in revolt against the airless naturalism of Zola and his disciples, became the crystallization of a tendency, and as such is undoubtedly important from the standpoint of literary history. Moreover, the chapter on the Latin poets of early Christianity may have suggested to Remy de Gourmont the studies that resulted in "Le Latin Mystique." But the tendency that fashioned "A Rebours" has expired; the more modern mind has rolled over to new styles and new variations of outlook upon life; and the book, three-fourths or eight-ninths claptrap, is irrevocably dead. But it is not without a certain feeling of regret that one bids it good-bye.