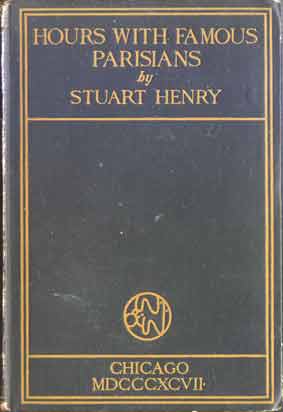 A quiet apartment in the palace of the French Minister of the Interior. A room furnished in green, a large desk, one or two sheets of paper, plenty of leisure, nothing apparently to do. The window open, a glimpse of green branches, a silent April afternoon.

A quiet little man at the desk. His legs are crossed and he is fumbling a ruler. His small, pointed gray beard and mustache are neatly clipped, and his gray hair is geometrically trimmed à la Renaissance park of Versailles. His cranium bulges out at the sides. He has a rather bright eye and a squirrel look.

Not a suave, facile man of the world. A noiseless talker willing to talk, but not knowing what to say next. No ceremony, no enthusiasm, no parade. A part of the time he scrapes the desk with his ruler like an idle boy at school.

"It takes me two years to 'document' myself for a novel — two years of hard work. That is the trouble with the naturalistic novel — it requires so much documentary care. I never make, like Zola, a plan for a book. I know how it will begin and how it will end — that's all. When I finally get to writing it, it goes along rather fast — assez vite.

"My business is applying naturalism to Catholicism. I have become a Catholic because I am extremely pessimistic. The religious people differ from the other pessimists only in that they annex a 'future life' scheme. Everything is going to the dogs. There is a great deal in the church that is a fraud. Its miracles, confessionals — all that is claptrap and absurd. But I enjoy its old preraphaelite spirit, its high animus, its art.

"In my next novels I shall study church paintings and cathedrals. Just now I am at work at the cathedrals of Chartres and Rheims. I am studying everything about them — stones, altars, windows. The only thing left for a novelist to dig into is Catholicism. The relations of the little grocery girl with the proprietor of the wine-shop on the corner, have been thoroughly exploited. Nothing remains untouched but Catholicism and its art. The priests are bête — they have killed religious art — we have none nowadays.

"The symbolists and neo-realists are a rather poor lot, in my humble opinion. There can't be any idealism in all that. The only effective idealism is in church mysticism. Brunetière is right: Science is bankrupted. This is the only thing in which I agree with him — and I don't see how that has happened. Science won't make us happy. But that does not prevent Zola from being the greatest of them all. What a tower of might!

"The psychologists are too artificial — necessarily so. They can't tell the whole truth — they can only tell it in a polite and varnished way. Mon Dieu! the old church writers could beat all the Bourgets and Anatole Frances put together."

All this, and more, is said in a low tone of voice, in an echoless, independent, reckless way, without gestures or flourishes. M. Huysmans is serious, quizzical, reverential, Bohemian. He mixes religion, slang, indifference, realism, mysticism, hope, despair — all — in a determined but tranquil air of convinced insouciance.