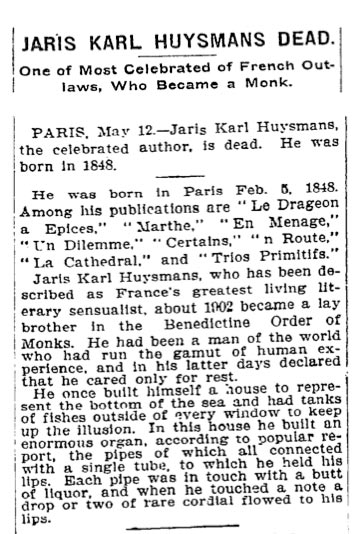 One of Most Celebrated of French Outlaws, Who Became a Monk.

Jaris Karl Huysmans, who has been described as France’s greatest living literary sensualist, about 1902 became a lay brother in the Benedictine Order of Monks. He had been a man of the world who had run the gamut of human experience, and in his latter days declared that he cared only for rest.

He once built himself a house to represent the bottom of the sea and had tanks of fishes outside of every window to keep up the illusion. In this house he built an enormous organ, according to popular report, the pipes of which all connected with a single tube, to which he held his lips. Each pipe was in touch with a butt of liquor, and when he touched a note a drop of two of rare cordial flowed to his lips.